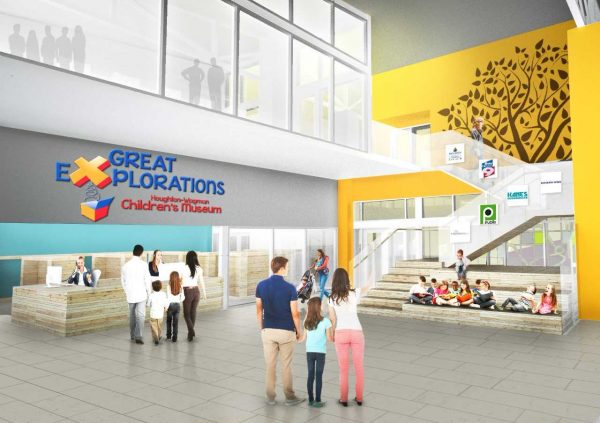 By stevieandfernDecember 18, 2017Uncategorized
No Comments

We’re officially half-way to our $2 million goal for our capital campaign, The Great Expansion, to renovate our current space. The Great Expansion will include construction of a new mezzanine, an upper level multi-purpose room, allowing us to serve 46,000 more children each year in museum programs.  It will also allow the museum to refresh our existing exhibits, develop an open-concept floor plan with new exhibits, and expand our award-winning Early Explorations Preschool. The build-out is expected to be complete in late 2019 by Wannemacher Jensen Create (WJC).

Last year, this nationally accredited museum reached over 220,000 children and families in the community and the museum’s many programs are overwhelming the current facility. Museum attendance is on a rise, many of our educational programs are at full capacity, and Early Explorations Preschool has a waitlist of over 30 children. The goal of this campaign is not only to expand for the museum guests and members, but to also increase accessibility to all and to make a bigger impact for the children in Tampa Bay.

“Great Explorations allows children of ALL abilities the opportunity to strengthen themselves and their families at the core,” said Great Explorations CEO, Angeline Howell. “With this expansion, we envision an exciting, enriching environment for our community’s youngest minds to learn, play and grow regardless of economic status or varying abilities.”

From 2016-2017, Great Explorations provided $550,000 worth of free in-kind services. This included 39 need-based camp scholarships, $21,800 worth of free family memberships to under-served families, $10,000 worth of services to low-performing Title One schools and more. We’ve also launched programs such as discounted, monthly events for children with special needs and their families, as well as a Museums for All Initiative, to provide access to the museum for families with an Electronic Benefits Card. Last year, Great Explorations also allowed 20 non-profits a free meeting space for parenting workshops, family therapy, team building and membership meetings. The Great Expansion will allow Great Explorations to increase these numbers, serving more children and families in the community.

“Great Explorations is an incredible community partner and gives back to the community in so many ways and so very much,” said Mayor Rick Kriseman. “GreatExplorations remains a major cultural asset in St. Petersburg for everyone to enjoy,”

The expansion project has already begun this fall with a remodel of the preschool classrooms and administrative offices, expected to be complete in 2018. In 2019, the mezzanine is expected to be complete, along with a new lobby and museum entrance. During this time, the museum gallery floor will be remodeled with an open-concept layout and new exhibits. The museum is planning on minimal closures during construction, but will notify guests on their website calendar.

Capital Campaign fundraising is being led by campaign chair, Scott Wagman; GreatExplorations CEO, Angeline Howell; and chief development officer, Darryl Feldman. We’ve already raised $1 million in donations and pledges from more than 50 supporters in the Campaign’s quiet phase, a year of intense internal planning behind the scenes. The quiet phase ended in October when Tampa Bay Rays third baseman Evan Longoria and his wife, Jaime, announced their $500,000 pledge at the grand opening of the museum’s new climber exhibit, Longo’s Cove. The museum has already reached 50 percent of its campaign goal, and is now asking for the community’s help in raising the remaining dollars required to make the project a success.

The museum is reaching out for individual gifts, corporate sponsors, in-kind construction donations and more. For more information about the Great Expansion and to make a gift, visit greatex.org/expansion or email development@greatex.org.